The impact of five individuals in American History

The title of this synopsis is Lateral Links of Greatness: the impact of five individuals in American History A BLACK HISTORY PRESENTATION

God has poured out his Spirit in the lives of great men and women during the history of our great nation.  During the last three centuries even pre-dating America as a nation, African Americans led the charge in the preparation of Christ’s return.  The Church played an instrumental part in representing the plight of African-Americans.  Whether an Apostle, a Prophet, a Pastor, a Teacher, or an Evangelist, in conditions of severe inequality, having experienced the chains of slavery, unrelenting racism or just life: The Joy of the Lord, lifted five individuals while facing great adversity:

And He gave some Apostles: Richard Allen born 1760 wanted to worship unburdened from white preferential treatment.

Therefore, he founded the African Methodist Episcopal Church in 1794, the first independent black denomination in the United States. Sara Allen his wife, a great support to him also worked taking care of runaway slaves; including feeding and clothing them and helping organize men and women.  The Allen’s’ took on social welfare issues for church members and the community and now the AME church exists on five continents in 39 countries 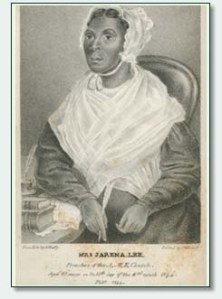 And He gave some Evangelist: Jarena Lee (Born 1783) was a woman filled with the spirit of God who spoke at times while in attendance in Allen’s congregation.   She traveled to Philadelphia from her New Jersey home in Cape May, to worship.  She was given to evangelism; Allen recognized her ministry and approved her to preach. She became an itinerant preacher and was the first black woman to publish an autobiography in America in 1836. (quote)“ I had preached 138 sermons, and traveled between 27 and 28 hundred miles.  Returned from Brooklyn, and attended a quarterly meeting at Flushing. . . . Saturday evening I gave an exhortation, and preached Sunday afternoon at 3 o’clock, the Lord accompanied the word … I arrive safe at home, found my son and friends all well, and then heard the truth of his conversion, for which I yet give glory to God.

And He gave some Pastors: Lucy Farrow was the Pastor of a Holiness church in Houston she was also the niece of Frederick Douglas and worked as a governess to Reverend Charles Parham an early proponent of speaking in tongues and who coined the phrase glossalia: (speaking in other tongues) she left William J. Seymour, at the helm of her congregation when her job transferred her to Topeka, Kansas where Rev. Parham taught training classes on conviction, repentance, sanctification, healing and the work of the Holy Spirit.

And He gave some teachers:

William J. Seymour gleaned foundational teaching on the Holy Spirit.  Due to racism he was not even permitted to pray with the others while seeking the baptism of the Holy Spirit under Rev. Parham.  Nonetheless, Seymour hungered for more of God and was determined to learn.  Parham later noted that Seymour could recite word-for-word the teaching he learned while sitting at the door while Parham taught white ministers.  He later became Pastor of the famed Azusa Street Mission which gave rise to the Pentecostal Movement upon the Earth.

And He gave some prophets: Charles Harrison Mason: founder of the Churches of God in Christ received the baptism of the Holy Spirit in 1906 at the Azusa Conference conducted by William Seymour.  In 1897, while in Little Rock, AR, Mason believed that God had given him the name the Church of God in Christ (COGIC).  He believed God promised him, “If you take the name that I give you, they would never build a building that would hold all those who would come.” In 1907 COGIC was incorporated. Mason Temple was constructed during WWII while construction materials were in high demand.  This was a miracle!  This task was completed for less than $400,000 making it the largest, black-owned convention hall in America.  Mason dedicated the nearly 5000 seat auditorium in 1945 visualizing the culmination of his dream.  From this efficis Dr. King, gave his final sermon on April 3, 1968.

Scripture A: (Foundation of the Church)

“And I also say to you that you are Peter, and on this rock I will build My church, and the gates of Hades shall not prevail against it” (Matthew 16:18).

Gate: Authority of the grave, Greek Mythology: the underworld inhabited by departed souls.

Gehenna (1067) the final destination of the wicked, the prison of fallen angels or evil spirits.

a. Denominations are like cars (i.e. Acura, Buick, Cadillac-Deville, etc.) they all get you to point A to point B;  Point A being Earth, point B namely Heaven.  Representing the Father (Maker), The Son (Owner’s Manual) and The Holy Spirit (GPS).  Faith (gas), Hope (steering wheel) and love (tires).  You’ll have a bumpy ride without love, no direction without hope and your going nowhere without faith.

Some appear to be real Christians, but are not.  They are cults.  They name themselves after Christ  like the Church of Jesus Christ, Latter Day Saints (LDS/Mormons) and who appear to be going somewhere but are only like the false moving cars, as seen on television with stationery drivers and fast moving backdrops.

b. The church is an organism (something living) as opposed to an organization.  Christ (CEO) yet lives.

c. Denominations are so appealing because humans are by nature territorial and naturally cling to groups, familiar and or chosen to conform to particular taste.  When asking someone “what church do you attend” don’t let your joy abate after finding out they are from a different denomination but rejoice in the fact that they have made Jesus the Lord of their life.

d. The church is not a denomination or a building. According to Stanley it leaves the parking lot after service in cars (bottom of page 9).

“Go ye therefore, and teach all nations, baptizing them in the name of the Father, and of the Son, and of the Holy Ghost: Teaching them to observe all things whatsoever I have commanded you: and, lo, I am with you always, even unto the end of the world. Amen” (Matthew 28:19-20).

Question 1: How does one commonly separate from the mission of the church?

“The fruit of the righteous is a tree of life; and he that winneth souls is wise” (Proverbs 30:11).

This entry was posted in Sermons and Lesson Outlines and tagged church.